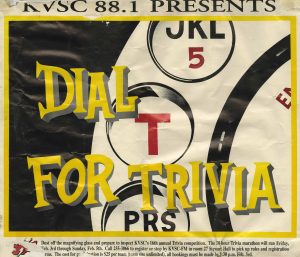 The mid-1990s was a time of transitory technology for radio and KVSC. Challenges were recorded on reel-to-reel tape and then dubbed onto carts (8 track style cartridges) for On-Air playback. While they didn’t know it this was the first year of the Goat Posse.

Since the Posse were complete noobs on the challenge line, there was little attention paid to archiving as they had not yet realized that “this Trivia thing” would become part of the fabric of their lives.

The Posse did have fun with the callers and on-air folk by providing providing a Kenny Loggins-Glen Frey hit parade primer. They also fielded a call from a person who was 11 years too early for the Trivia Idol contest but she did modify a Grease song… (More…)