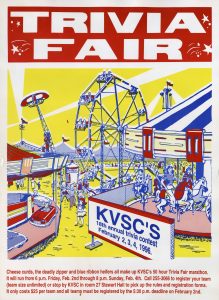 Captain F. was a brand new KVSC volunteer in 1994 and started answering phones during Hotel Trivia.  He was still a trainee then and had no production skills.  It was a Posse of One, but the trivia experience did imprint upon him the glory of this blessed weekend.

In 1995 during Dial T for Trivia, Captain F. returned with Wildman and Dude and thus the Posse was officially born. They answered phones and spent time in the challenge line where their futures in Trivia were launched.

Not mentioned often in these pages is the role of the Posse each year on the phone bank. It started with working the first phone bank shift of Trivia answering phones. Soon Capt. F and Wildman would move up to supervising this shift with other Posse members also working phones and helping new trivia volunteers.