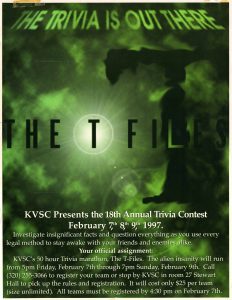 It was one in the morning in early February in St. Cloud, Minnesota.  A small group of people assembled on the shores of Lake George, an over-sized pond in the middle of the city.  That year, Jolt Cola was a sponsor of the contest and one of the items the company provided were jock straps with the company’s logo on the cod piece. This spurred one of the teams to issue a challenge that would cement the legend of the “Lake George Streaking Incident”.

E.T. and Digital Dungeon Dwellers were involved in the challenge, however, the Posse is unsure who challenged who. During this time, the Posse wasn’t the only people who worked the challenge line. Crabby Appleton (Dave Lee) was out and about that year with the KVSC cell phone (which actually had a base and a cord in those days) and was on hand to call-in a report that would become a classic KVSC Trivia moment. UTVS was also present and a grainy video of a naked and thonged young man skating off into the darkness was produced.  (More…)