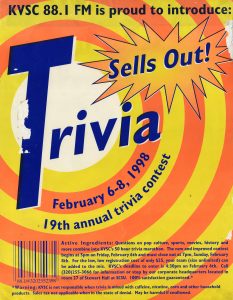 In the 1990s the Posse never really saved many of its challenge line calls, mostly because they took calls to entertain themselves.  This year’s theme spurred many creative scripts aping current commercials of the day and pitches for products that are uniquely trivia. It would also be the year that The Goat Posse got its name.

I can borrowed from a Gatorade Superbowl commercial a few weeks earlier, and served as a catharsis for Captain F.’s sorrow over a Green Bay loss in the big game.  KV Be was a brilliant script, composed by Dude and Robin, who also delivered the lines. Uncle Corn Beanie Baby was inspired by several things, but they are just to horrible to describe. The year was rounded out with a Top Ten list regarding a randomly selected hour. It would seem that the Posse was the only group that got they joke that there was not significance to Hour 43.