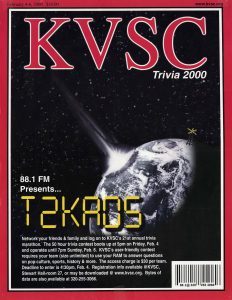 The was the year before the “modern” intros began and while some sort of introductory production was planned a different trivia audio project used up all the pre-trivia production time and energy of Captain F. and Wildman.  Call The Challenge Line was an original piece written by Wildman based on a popular newspaper column put to music by Baz Lurhman and released as the single “Everybody is Free to Wear Sunscreen”.  The original column was a commencement address to the today’s youth if the columnist had been asked to give one.  More details about how the Posse version was put together can be found below.