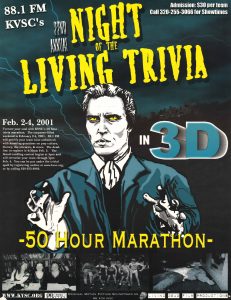 The  Posse was quite disappointed that the Trivia Gods chose this theme this year.  Honoring Kubrick’s masterpiece would have been a fitting theme and not cliche.  Regardless, in 2001 Captain F. took a whole new approach to creating the intro.  Up until this time there really wasn’t a philosophy behind how it should be constructed. The only rule is that it needed to create excitement like a sporting event.  For a deeper explanation regarding the genus of “The Intro” see the entry below.

The challenge line calls worth saving featured a sprinkling of submissions from the Neo-Maxi Zoomdweebies. 2001 also signaled the end of an era as the Posse stopped combining challenge line calls before sending them to be played on-air.  Since the digital age had firmly established itself, the old habits left over from the cart (8-trak tape style device) days slowly faded away.

The Posse had its first production since Trivia Sells out to go viral when it produced The Chorus of the Living Dead Presents: The Top Ten Things Happening During Hour 26. Inspired slightly by a Saturday Night Live skit from the 1990s featuring Frankenstein and Tonto singing Christmas Carols, the Posse created a Greek-chorus style challenge and response top ten.