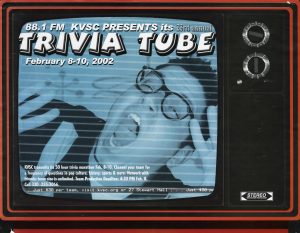 The Intro would set the stage for one of the classic challenges put forth since the mid 1990s.  More on that later.  The TV quotes or quotes about the medium were not hard to find.  Captain F. and Wildman would use a historical timeline to layout the theme for Trivia players.  Captain F.’s crush on the music from the film Run Lola Run provides insight into why most of the beds were gleaned from the soundtrack.

The Posse fielded typical, but quality challenges about snowball fights, a challenge from a local business, and a moon walking race.  The snowball fight challenge has been done many times (More…)