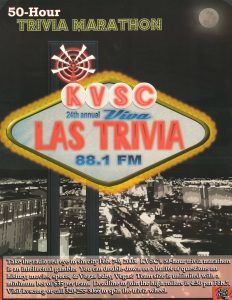 By Saturday of Trivia (Day 2) the challenge line was in its usual funk, not because of the smells, but due to a lackluster showing by teams.  The usual “Get this next question right” challenges had started to sour the mood of the Posse.  Then the name Brad Olson would change everything.  In an ABC TV mini-series of challenges that stretched to four episodes, Brad Olson went from sought-after free agent to pariah who was less desirable than a Baby Ruth in a pool. Brad’s role would be prolific as he even found is way into the year’s only skit, The Joe Hustler School of Trivia Points Gambling.

The intro used a relational module form employing such subject headings as “Hive of Scum and Villainy”, “Greed”, “Money”, “Vegas”, “Elvis”, “Sex”, and “Show Business” woven with both producer-favored techno and some off the wall selections.  Although a favorite of Captain F.’s, this is to this point the only time he has used KVSC’s G. Gordon Liddy ID in a production, for Trivia or elsewhere. (More…)