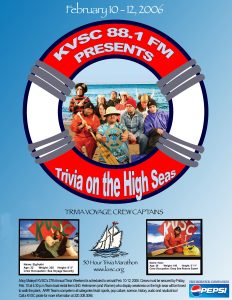 The Posse had lots of company in the Challenge Line in 2006 as a fair number of challenges were phoned-in and Posse audio theater had a full playbill. The Goat Posse players had fun this year as both Pirate at the DMV and Trivia on the High Seas Top Ten were written on-site at the KVSC diner booth.

Pirate at the DMV was ably acted by Phal and Fluffer, who provided a very convincing Minnesota accent considering she is from Milwaukee.  Trivia on the High Seas Top Ten was written and performed in the manner of an earlier top ten produced in 2001 that featured a Greek chorus style format.

After a year hiatus, the Posse tackled the Stink Rock genre with Celebrity Stink.  This Rock collection was stuffed full of great examples of celebrity singing gone awry.  The fact that it was stuffed full left the whole production bloated and it ran too long for Posse sensibilities.  The lessons learned would serve future editions of Stink Rock well.  One good thing Celebrity Stink yielded was some great outtakes from the Voice of Corn who returned as narrator after debuting with “Wedding Stink” in 2004.  This helped to solidify the formula for which future Weekend-In-Review productions would be cut.

The weekend started with an interview Captain F. and Wildman did with ‘Ol Chumbucket, one of the two men who started International “Talk Like a Pirate” Day.  To combat lame challenges the Posse produced Challenge Line Hold Music, but in keeping with policy; the Posse saved these mind-numbing challenges to instruct future callers about what not to do. (See: Mario Kart DS)