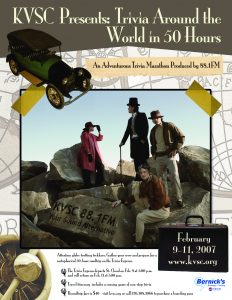 After several years of drought it was a Challenge Line bonanza in 2007. It was the first year Digital Dave and Fast Eddie (The Leuter Bros) from the Philly clan joined the Posse after years of hounding from Captain F and others. Several themes emerged including a team that had a ham fetish and other teams that acted as porcine enablers.

DD and FE as rookies on the Challenge Line gave good phone to two young ladies who had a talent for licking elbows. It was amazing that the Posse was able to produce a fair amount of original content considering the phone was ringing non-stop; many of these calls were actually worth the effort it takes to produce them and play them on the air.
The Posse once again offered a Stink Rock record, this time featuring singers that left people wondering if it was real, or is it Memorex? Lip Stink was well-received, but paled in comparison to the response the Posse received for its call-in contest: Trivia Idol. (More…)