One of our Favorite Moments from 2012 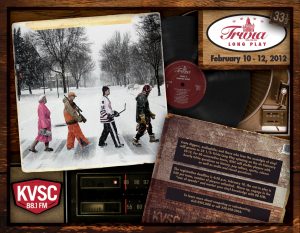 The Goat Posse really enjoyed 2012, as for once, the group resembled an actual trivia team with participants from four different age decades. The Posse welcomed back for the second straight year Dude, who returned after a multi-year hiatus due to real-life obligations. Dude is a charter member of the Posse and his sharp writing was missed.

In the weeks before the contest, KVSC had remodeled the forum studio with brand new equipment and the Posse was given exclusive use of the space in order to work out the bugs. The Posse moved in and felt very comfortable with Capt. F taking up 24 hour-a-day residence in the days before, finalizing the Intro with help from KVSC Production Director, Bear, and Posse members, Mr. Choo Choo and Princess Buttercup.

In the past, Capt. F possessed the only production skills in the Posse, which limited work to one project at a time. While it has happened to a degree in recent years, this time Capt. F had no major role in any of the productions save for the Intro. The Posse drafted like the Green Bay Packers over the years and now has a deep bench of veterans and rookies with complimentary skills.

It was decided by the Posse early on to almost completely ignore the Challenge Line and focus on original works. It was a keen strategy as only one redeemable challenge was recorded, included a social networking element, and offered prizes. However, no one answered the challenge which verified the Posse’s decision to ignore the rarely ringing phone.

“AutoTune Stink” was co-led by Dude, who oversaw the script, and Mistress Carly, who served as producer, and many Posse members and others contributing lines, voices, and traditional sayings such as KVSC Station Manager, Mama Jo, who has given a testimonial in every Posse Stink production since Wedding Stink. Her line always begins with for example, “I didn’t catch the bouquet, but I’ll be sure to catch a copy of Wedding Stink”.

Collaboration was key as Dude, Drrrty A, and Coco created the masterful production “ShamGoat” which is a play off the infomercial for ShamWow. The Posse excels at spoof commercials (see Trivia Sells Out), and “ShamGoat” was a hearkening to that tradition. “ShamGoat” is dozens of incredible one-liners packed into three minutes and delivered so convincingly voiced by Dude that half the Posse actually dialed the number at the end of the bit.

Flying under the Safe Harbor banner were productions “Stay the F*cK Awake” (written by Wireless Mic, a twist on the Samuel Jackson’s dramatic reading of the book “Go The F*ck to Sleep”) and “Sh!t Trivia People Say”. The former is worth the listen to hear Bear impersonate the voice of Cleveland from Family Guy.

One of the greatest treats for the Posse was the participation of Historical Trivia Individual Al Neff in 2012’s productions. Al was made a key cultural element in the Intro due to spending his rock and roll and radio formative years in the vinyl era. Also, we just had to have warm silky voice and pacing which wonderfully represented the AM Radio era.

Also returning to the Posse was KV Alum Patrick Jaye, an early radio production influence for the Posse; who collaborated with Al to ape the emotionally overwrought animal rescue infomercial hosted by Sarah McLachlan. It had been some time since Al had been at Trivia. Pat helped out many years ago on “Ursula Fabuline” back in 1997, but this was the first year he committed full-time to the Posse. Both Patrick and Al used to write the goofy awards given out at the awards ceremony. The Posse has been humbled by the opportunity to carry on that tradition these past years.

Finally, 2012 marked the third year of operation for the Goat Posse Video Department which is some sort of miracle since the Goats have an aversion to images. This year Phal wrote “5-Hour Shot of Ass” a follow-up “Can of Ass” (2010). This was by far the most intricate Posse video production yet and required many of the various professional and private talents of Posse members. That expertise yielded wonderful on-set props such as 5-Hour Shot of Energy bottles were wrapped in custom-made 5-hour Shot of Ass labels.

Dude used his art direction and Photoshop prowess to create video stills involving tater tots and cheese. There were also on location shoots as the Posse vid crew visited two team headquarters to record quotable gems as, “I don’t want smell spic and span…I want to smell like beans and ham”.