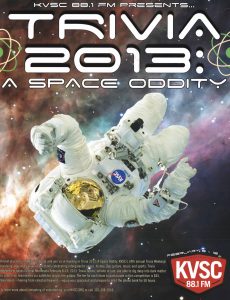 The Goat Posse featured a cargo bay full of creative talent that produced some high quality and fierce productions.

The intro was again another team effort with multiple Goats working together to assemble aspects of the audio piece. A considerable amount of prep work was performed by CoCo in the weeks before, downloading or recording audio clips. Wildman reprised his role as “Quote Order King” arranging over one hundred in an order that would make sense.

The first audio clips would not be put down on the multitrack audio canvas until five days before the contest but it all fell into place fast; much faster than anticipated and it still turned out spectacular. Now, that truly maybe an oddity.

Who knew that a relationship based on tonsils and tongues would create such glorious comedy. Bear and Phal, the Donny and Marie of radio trivia contest ancillary input wrote, voiced, and produced a skit that involves bathroom humor, but avoids the sophomoric undertones.

An ad featuring Paul Harvey “God Made a Farmer” was ripe for the picking. The Posse wondered exactly what reasons God would have to make a radio-based trivia contest.

Dude and his Mrs. in the alternate world are primo costume makers. Mrs. Dude, cognizant of the theme, used the interwebs to find simple directions on how to make Yip Yip puppets from Sesame Street fame. The Yip Yips appeared  both on UTVS and on the air via Posse voice actors, Phal and Bear.

Captain F., Wireless Mic, and J-Mont-G, airline pilots in the alternate world, led a boarding party to UTVS and captured the bridge of the Starship Enterprise and the hearts of viewers everywhere, as Gary Z. watched helplessly.

In the age of unnecessary censorship, CoCo crafted an important message about a problem that is not easy to talk about. It is so taboo we were nervous about airing it; even during Safe Harbor.

The weekend would build to twin crescendos of bleat-filled rapture with the debut of Trivia Network news and a daring scoop by its Hamster-stalking reporter The Rhyminister. Trivia players barely recovered when they were presented with the supernova that was Major Digression.

Yes folks, The Hip Hop Division of The Goat Posse returned for another flawless send-up of an already masterful Lonely Island send-up. Major Digression would see the return of all the major stars along with a new band mate who would send repress valves fluttering.

This year may have been a place where no Capra aegagrus hircus had gone before, but the Posse felt right at pen. Come on and wallow in wretched wonderfulness that is Trivia 2013: A Space Oddity.