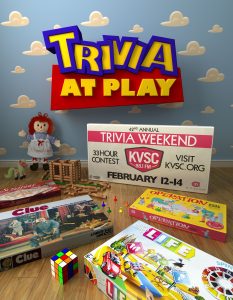 This is a tale of two Trivias. Because of COVID and the re-formating of the contest to fit remote volunteers, the Posse tried to do as much pre-production of our usual frivolity before the starting gun so that we could be available to work phone shifts if needed. IT WAS NEEDED.

It was so unlike us to be organized, but we were. The intro had no less than seven producers and with the usual mastering by Coco and Drrrty A, and was “in the can” an entire week ahead of time. It took all his strength for Captain F not to try and tinker with it.

The pre-planning also allowed the balance of the songs and skits to be completed ahead of time. Many of the skits feature great writing by FoP Alan, Oates, Cobby, Dubs, and Drrrty A.

Returning to the fold with a vengeance after a good spell away was Fluffer, and we missed her dearly. After a brief brainstorming session between Fluffer, Phal, and Captain F, she turned around the lyrics to “We’ve got a Trivia Team” in two days. Phal voiced the song and Coco mastered it two days later.

Fluffer also flaunted her voice talents with a perfect rendition of a Wisconsin-accented mother in the Safe Harbor! Intro which also featured Captain F’s offspring.

A few other great productions that have a certain flair and panache are Battleship IRL, Amanda’s Toy Box, and Trivia Minutes.

We could write a dissertation on the technological leaps that Coco, FoP Dorf, and Piss Boy made to create a virtual phone bank that ran almost flawlessly. It’s not the whole story but it was emblematic of their contributions to contest year over year. In recognition of this, KVSC made Coco and FoP Dorf this year’s Trivia Volunteer inductees to the Trivia Hall of Fame.

The Goat Posse gives out internal awards too. In recognition of dedication to the Posse ethos in the past few years and their desire to run with the herd, we initiated B.A. (FoP Alan), Dazeem (FoP Janna), and Thorin (FoP Casey) into the Posse. We are so very honored to have you hoof the trail with us!