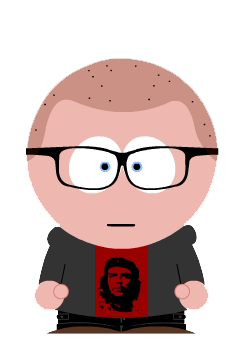 Pokéjohn may look like a cuddly creation of faceless Japanese picture drawers, but get in the way of his audio samples and his icy stare will make you consider appreciating country music again for it’s genious.

But every animated superhero has their Shake-N-bakeperian flaw. For Pokéjohn, he can’t stop feuding with the other consumption classes.

In fact, Pokéjohn was just released from the Stearns Country jail after serving a two month sentence for incitement. It seems he arranged a swingers potluck at Riverside park, inviting both omnivores and vegans, while filming the awful scrum from the branches of a nearby oak.

Natty, as he is known by the Goth kids who have a clubhouse just south of the St. Cloud dam, is the latest in a long line of Goat Posse audio ar-teests.

Pokéjohn often can take a Rubix Cube of audio and present it more simply than Alan Turing. He is on the vangaurd of a new era as his touchpad skills stand out in the mouse-clicking audio editing world. Just don’t look him in the eye.