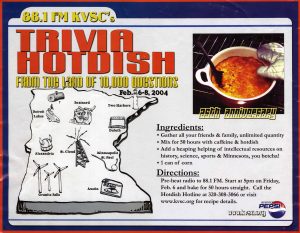 Creating the intro for 2004 was fun as Captain F. enjoyed celebrating and laughing at upper Midwestern culture.  The intro borrowed heavily from several popular films that are quintessentially Mideastern in style and substance.  Fargo, Escanaba in Da Moonlight, and American Movie provided a treasure trove of quotes that touched on such themes as cheese, hunting, hockey, food, and dialects as the intro sets some sort of record for the amount of “Yahs” in a 15-second period.  The intro also made possible the use of a Slip Twister song, much to Captain F.’s delight.