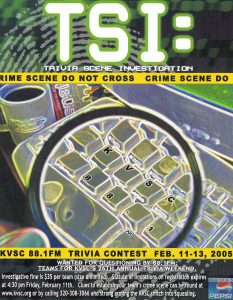 The Posse came back with a vengeance after a light effort production-wise in 2004.  It started with the intro which was comprehensive in both content and artistry.  The theme lent itself to a story line and the order of the sound clips were arranged to weave a tale from the moment a crime was committed to the final benediction for the victim after the criminal was caught.  This year also saw the first emergence of the intro within the intro.  Specific scripted liners were voiced and produced to give the listener a clue that the start of the trivia contest was acutely imminent.

In the challenge line, the charter members of the Posse welcomed Fluffer for the first time.  Also joining the Posse (Yet to return in subsequent years, but always invited) was Snap-Roll-Sam who knew Captain F. from his aviation sphere.  Sam is a law enforcement officer in his real life which served him well in the Challenges Only! skit where he played a drunk looking for a ride home.  (More…)