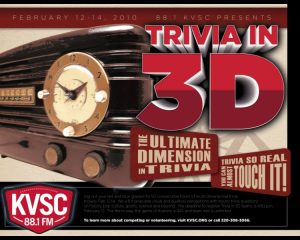 As Jim Gray would say in 2010, “KVSC got a whole lotta Posse”.  Eleven Posse members made the trip this year to St. Cloud to assist in the Posse’s stated role of staffing the Challenge Line for “all 50 hours of the contest”. New in the flock this year were Slider, son of Digital Dave and nephew of Fast Eddie, and Coco, formerly the leader of a Wisconsin based trivia team “Cowbell Trivia”. The large crew was needed to make sure nary a call was missed, produce an ambitious list of original productions, and record the Posse’s first infomercial.

Much to the chagrin of Captain F., this year’s original productions were heavy on the fart jokes. (More…)