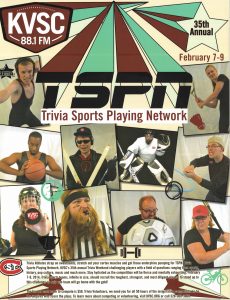 The Goat Posse became of legal age to drink this year, but that never really stopped the kids from imbibing on rhymes, skits, audio clips and wool. Posse members have become an ever-changing but critical mass of talent that is capable of running several projects at once. The intro kept Captain F. in a creative vein finishing a day early since for the first time ever, he would not be at KVSC for Hour 1 of the contest.

There were a few recurring motifs with including a follow-on PSA about male genitalia, this time with a sports theme. Additionally, a legacy production would say goodbye as the Posse pinched-out it’s last version of  the Stink series. Be sure to listen to the tearful farewell.

Last year the Posse re-discovered the gonzo producing style of trivia with Trivia News Night. This year a second broadcast was aired as the news team covered a major world sporting event, and predictably found the slimy underbelly. Way to overachieve kids. (More…)