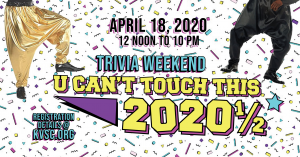 This was a surreal time for The Goat Posse and Trivia players and volunteers all-together. To conceive, prep, and hold a KVSC-style trivia contest in two weeks was both challenging and exhilarating. For the Posse, it required supreme effort. Normally Posse prep happens at home with final preparations occurring on-site once elements of the Posse arrive a day or two prior.

This year all prep had to be done remotely. Additionally, CocCo and Drrrty A had additional duties related to the unique nature of the contest configuration. CoCo worked with Number 2, Pissboy, and others to create the video elements that are usually handled by UTVS.

When CoCo wasn’t on the air he set up a video production suite in his living room and played television director during the contest. In their den, he and spouse Drrrty A set up a broadcast console for the two hours each of them hosted with Number 2.

Drrrty A normally is very involved with much of the yeoman production work required to record all the underwiter announcements, plus other key production elements. This year there were no underwriters and no phone bank but Drrrty created “hello” liners for phone bank, Posse and other voluteers to record greetings that aired during the rejoins throughout the broadcast.

Oates, Buttercup, Cobby, Honey Trap all provided production for Posse productions this year. Dude was a silent partner this year, preferring to let his images do the talking. He designed the Trivia logo and created many of the television background slides used for the video portion of the broadcast.

It was fun to try and do this but I think once a year is just fine even though the weather outside was much more enjoyable.