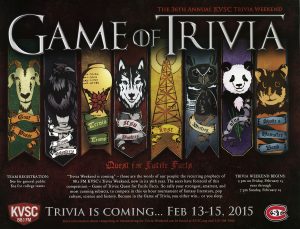 We are happy you have journeyed to Game of Trivia as imagined by the Goat Posse. It was the first year Captain F had not physically attended Trivia since his first phone shift in 1994. But it was for good reason as a little goat needed care at home. Captain F’s major contributions were with the INTRO which are detailed below. However the Posse is not one, it is many and they did MUCH this year.

It was an insane harvest of original productions starting off with a Top Ten List of Game of Thrones quotes that may or may not excite your lover. The Phone Bank is always a great foil and we found that they are dedicated lot, you may need to hear their pledge. (More…)